Thinking is Overrated in an Art Journal 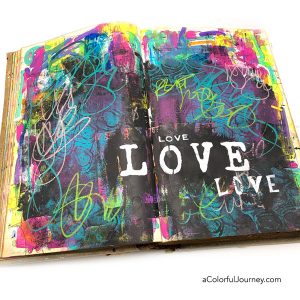 Thinking isn’t always a good thing. It led to problem after problem on this art journal page. I had thought myself into a quandary but there was a way out of it. https://youtu.be/TGFa_zuQUOc This art journal page has been through a lot. I loved the colorful background that I had. And then I had an [...] 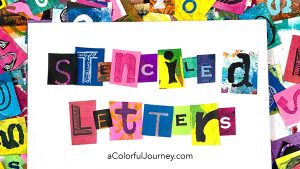 I had a bunch of requests for how I made the ransom style lettering using gel prints and stencils from my last blog post. You asked, and I listened! Here’s the video showing you all the techniques I used. In there you’ll see how to stencil the speedy way if you’re doing a lot of [...]

The Reality Check About My One Word for the Year 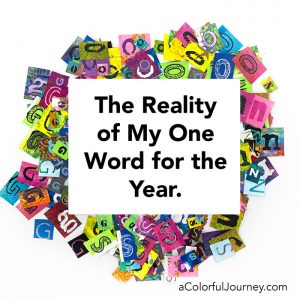 How much pressure could there be picking one word for the year? Turns out a lot. Like so many people this time of year, I choose one word to be a beacon for me through the upcoming 12 months. It was such a huge commitment, you’d think I was signing a contract in blood with [...]

I Loved this Background and Didn’t Want to Cover it Up! 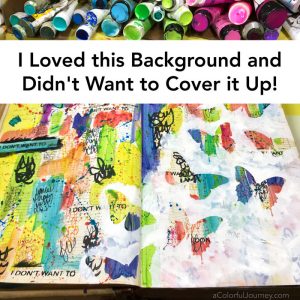 Ever have a background that you love and when it comes time to cover some of it up, you don’t want to? That’s what happened to me but I found a way around it by using a butterfly stencil-mask and some white paint. You’ll also see a new gizmo that I used to stencil the words [...]

A Daring Art Journal Page in the 150 Year Old Journal 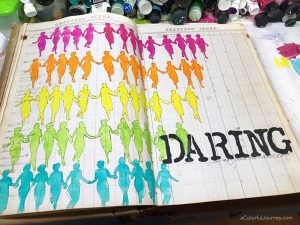 This 150 year old Grantee ledger was destined to become an art journal the moment I saw it. This is a one of a kind journal and it called for something special. After getting the journal home, a little research enlightened me as to to what it was originally used for. It was for recording the receiver of property, the [...] 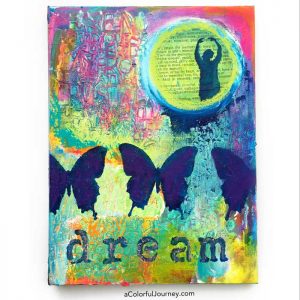 The plan for this canvas went horribly wrong. The idea in my head did not translate one bit the way I intended on the canvas. That is a polite way of saying “Yuck, it was rear end ugly!” But it was just an O.O.P.S., an Outstanding Opportunity Presenting Suddenly, that started the journey of this canvas. [...]

OOPS…A No Fail Plan that Failed or Did it? 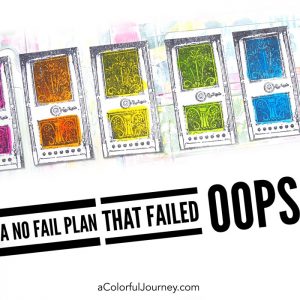 O.O.P.S…This just wasn’t coming together. The no fail plan I had in my head to use up the scraps from die cutting in my art journal flopped. It failed big time compared to what was in my head. But did it really fail? When things don’t come together, it is just an Outstanding Opportunity Presenting [...]

Am I Dreaming of Pink Spiked Hair? 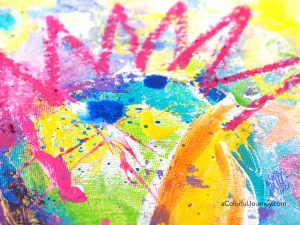 A forgotten piece of play grabbed my attention and before I knew it, a visitor showed up. This bright, and quite silly, character came to life all because of an O.O.P.S. I started by stenciling the word dreams with acrylic paint and my Vintage Typewriter stencil on a canvas board that had been hanging around the studio for [...]

OOPS! How I Handle it When I Can’t Play 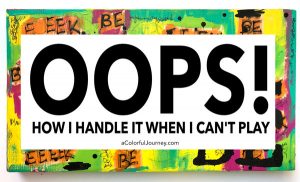 I was completely in my head when I tried to play. Any idea I had was shot down instantly. That first step of getting started felt paralyzing. My muse had left the building. Play was not going to be happening with this mindset. But this has happened many times to me and in the video, I am [...]

Scribbling and a Play Manifesto 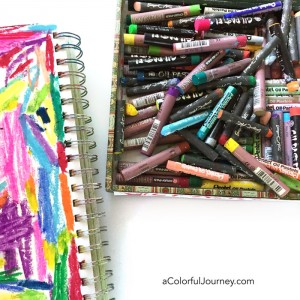 One of my favorite ways to let myself play is to act like a kid. After all, kids are the masters of play so it is no surprise that they are the inspiration for this month’s Let’s Play theme. This miscellaneous box of inexpensive oil pastels created a scribbled background in my art journal. The [...]