Previous post: OOPS! I Loved it Then I Hated it. Now What? 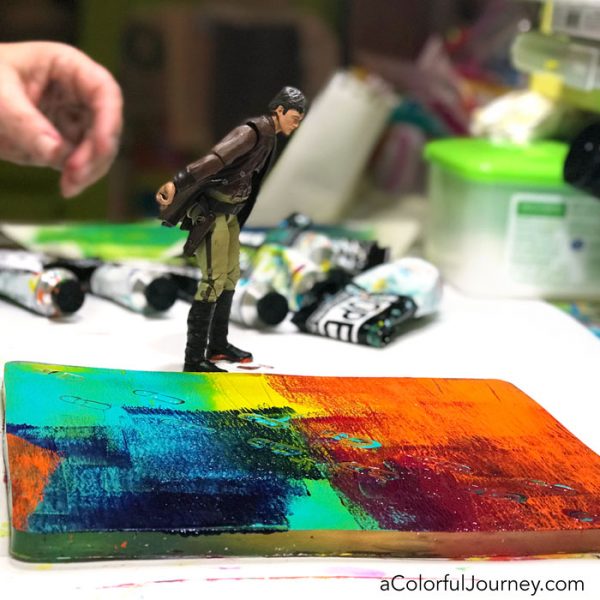 Just about anything can be used for pattern making on a gel plate including toys! Just ask Malcolm Reynolds, the action figure from Firefly that made the pattern walking across the paint. Why him? Because of his shoes. Why did I need that? You’ll see in the video!

Watch Making patterns on a gel plate with a toy action figure on YouTube.

Want to know more about gel printing? I’ve got a page full of techniques and tutorial including getting started step-by-step and even my husband making a print. Check it out here.

The paints are Golden Open. These are designed to stay open, or workable, longer than regular acrylic paint. The benefit is that it stays wet longer so no rushing to take a pull. The drawback is that it takes prints a long time to dry by my standards. 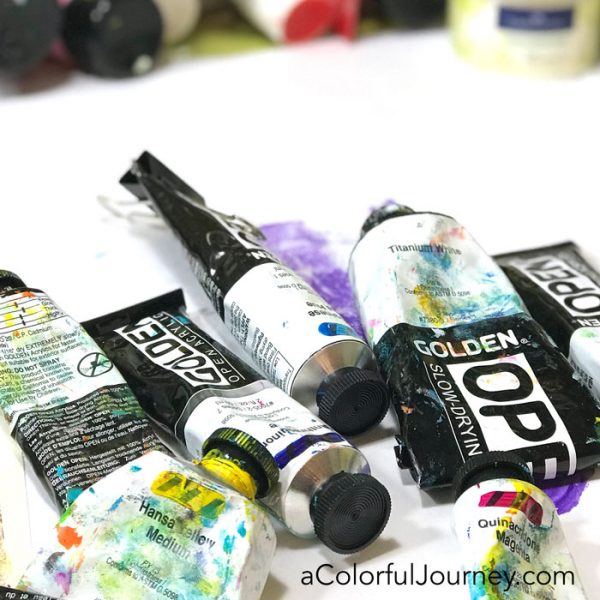 The song, One Foot by Walk the Moon, was on repeat all day in the studio so I wanted to have feet walking across the plate. But my feet are way too big.

Since these are Open paints, there is no rush to get the print pulled. I had time to find just the right way to get footprints on there. But it didn’t take me long at all to find exactly what I needed. 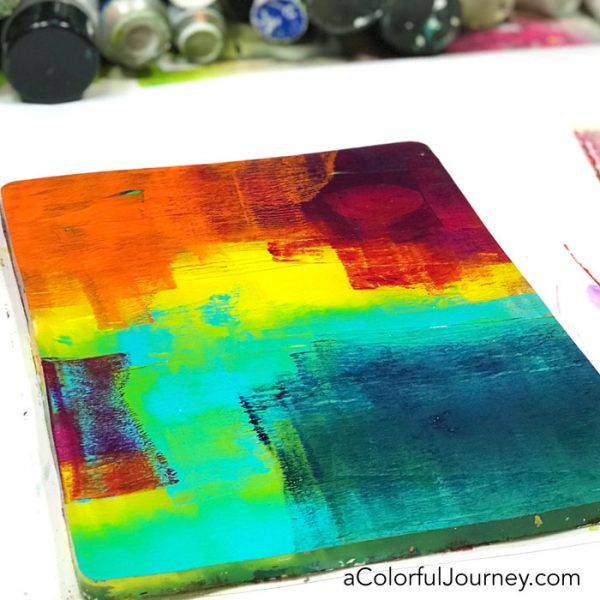 I needed an action figure, and I have several of those in the studio. Malcolm Reyonlds volunteered for this. His feet were just the perfect size to walk right across the paint. Plus his boots now have fancy rainbow soles, even better than a Christian Louboutin shoe!

Who is Malcolm Reynolds? He’s the captain of Serenity on the tv show Firefly. It was only on for one season, but what a glorious season it was! 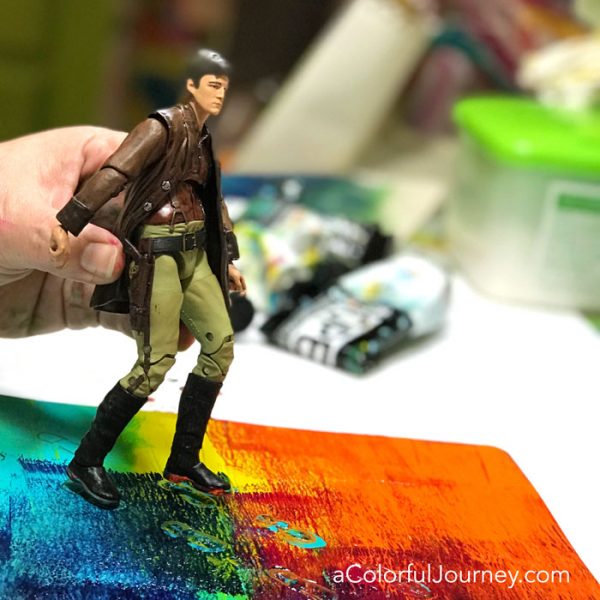 This needed a playful title, so I grabbed my Ransom Alphabet stencil. But there was a problem with it, specifically the Os. In just 2 little words, there were 3 Os! But the number 0 looks just like an O. 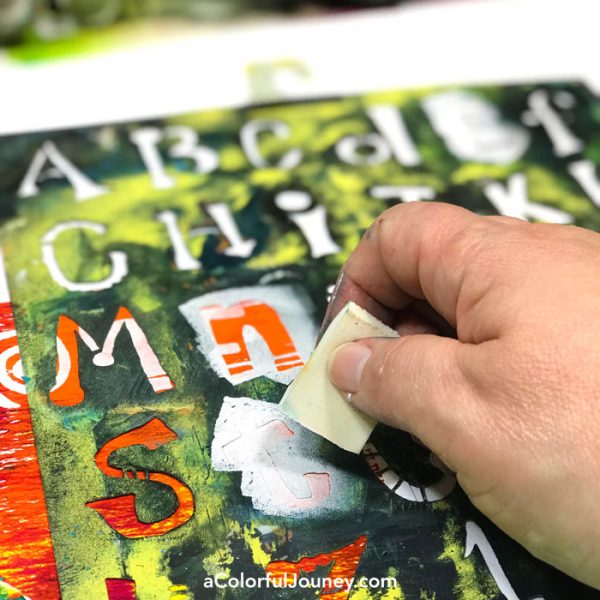 The two “O”s side by side was a real quandary for me. That would make it so symmetrical and that just didn’t fit the vibe I was feeling. So I flipped the stencil, and one O is upside down.

Now they weren’t identical, just a wee bit different. With a letter like O, it still works. So glad this wasn’t the letter W, because flipping it around would make it an entirely different letter! 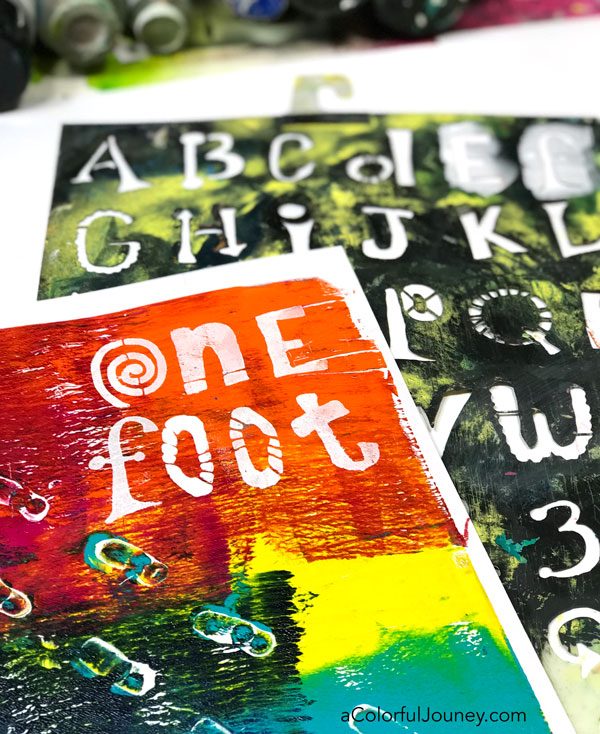 Writing those words legibly felt like I was skydiving without a parachute! I had been singing along to this song on repeat of the entire time and I wanted them in there so I attempted to write them. O.O.P.S It’s an Outstanding Opportunity Presenting Suddenly. 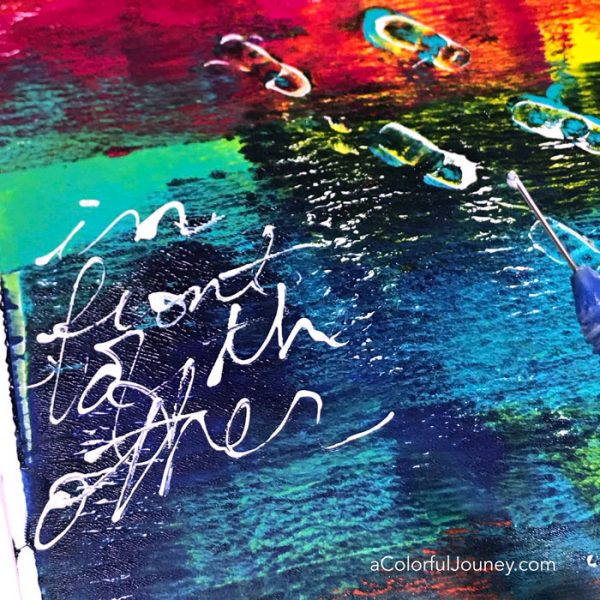 How did I deal with that? It got the full scribble journaling treatment. I have to say, I like that far more than what I had originally planned, even if I had been able to write it neatly.

Now you know one of the bands I love to listen to while creating, what about you? 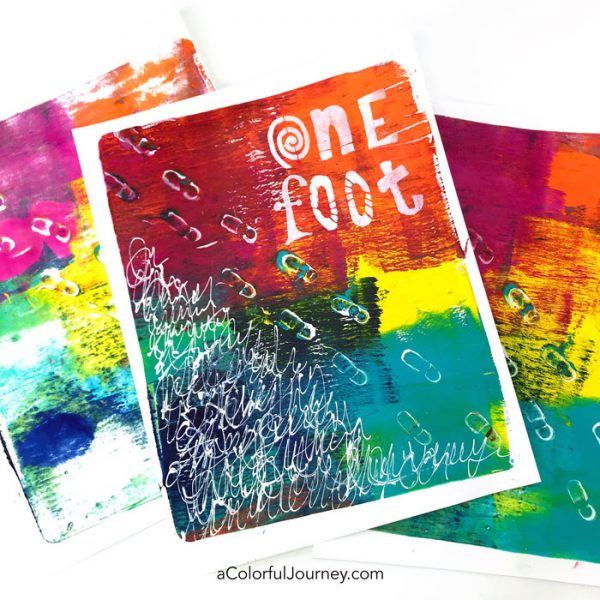 Want to know more about gel printing? I’ve got a page full of techniques and tutorial including getting started step-by-step and even my husband making a print. Check it out here. 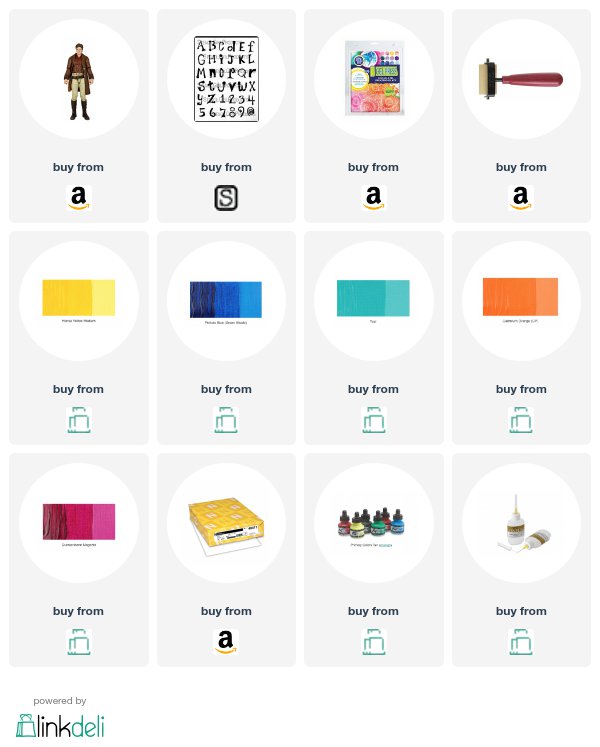